Exploring the voice in music

This workshop, run by members of Phaedra Ensemble in partnership with CoMA, draws on ideas and themes that feature in their current concert series ‘VOX’. Laura Moody, an acclaimed songwriter, composer and cellist from the Elysian Quartet for over 10 years will join members of the ensemble to work with participants exploring themes like communication, improvisation in music and fusing speech, text and music.

Phaedra and Laura will be drawing on their first hand experience of working with artists from others fields such as choreography, theatre and improvised music making. The workshop will be a relaxed introduction to practices in contemporary music making where the line between composer and performer are blurred, and musicians become central to the creation and direction of the music as well as its performance. No previous improvisation experience is needed nor ’strong’ vocal skills, just a willingness to collaborate and have fun doing it!

The Friday evening session will start with an introduction and short performance of works by Phaedra and Laura, followed by exercises and group ‘games’ that start to explore ideas on collaboration, improvisation and communication.

Saturday morning will begin with an introduction to the techniques we will be using during the day and more musical exercises before we break into smaller groups to devise a performance from material developed by Laura and Phaedra.

The day will end with an informal concert with all groups performing their work. 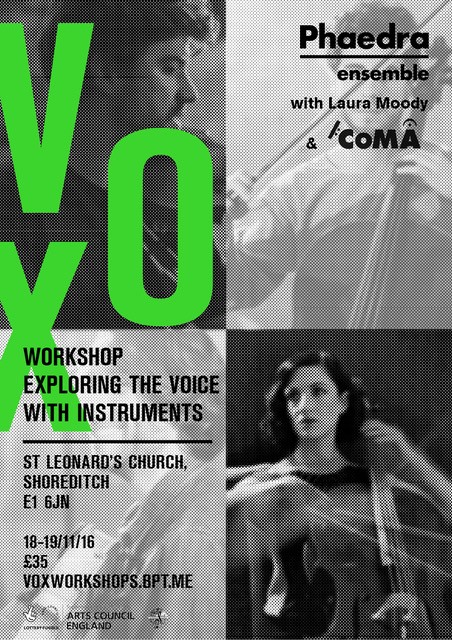 Founded in 2014, Phaedra Ensemble is built around a string quartet plus collaborators from across London’s diverse musical landscape; incorporating jazz, folk, and contemporary classical musicians. Its members are drawn from London Contemporary Orchestra, F-IRE Collective, 12 Ensemble and Ligeti Quartet, amongst others.  Previous performances include Kings Place, The Barbican, The Roundhouse and TEDx. They are resident ensemble with multi-sensory arts collective Bittersuite and recent collaborations include Pulitzer Prize-winning composer Caroline Shaw and avant-pop musician Tanya Auclair.

As educators members have taught, coached and facilitated workshops at the Universities of Chichester, Middlesex, Cambridge, The London College of Music and Aldebourgh.

Laura Moody is a cellist and vocalist who achieved international acclaim as part of the innovative string quartet the Elysian Quartet, who were known for their pioneering performances and recordings of contemporary classical, experimental and improvised music. She has also toured world-wide as a member of physical theatre string ensemble The Gogmagogs, as well as the Meredith Monk Ensemble and performed extensively in theatre and contemporary dance productions. She has toured, collaborated and recorded with leading musicians from a hugely diverse number of genres from folk to hip hop. All these elements are brought together in Laura’s solo work which blends voice and cello playing in a unique and virtuosic way.  “it seemed almost as if she had taken every musical influence that had come her way and put them in a blender…certainly extraordinary and sometimes disturbing. But what surprised me most …was just how often it became mesmerising.”- The Arts Desk