My last live music event was the fantastic East London contribution to the Festival of Contemporary Music for all back in March. Like everyone else I’m really missing live music making, but whilst some ensembles have tried real rehearsals again, we are still going to have to rely on online alternatives for some while. We’ve all used Zoom, which works out of the box for most people. It’s designed for meetings but adapts well to music in some circumstances with a few tweaks to the settings. But in other situations, its limitations are so frustrating. The delays, the lack of synchronisation and the fact that no more than two or three people can be heard at once mean that the sense of community of music-making is lost.

There are good solutions for professional music makers, but they are way beyond the pockets of most CoMA musicians. Looking for something within the budget of amateur musicians which only requires a domestic internet connection, Jamulus looked as if it could do the job of minimising delay and jitter (variation of delay), and allow everyone to hear each other. Originally written as an academic project many years ago, it is still going and, not surprisingly, has had a new lease of life.

At the end of August I joined the online workshops about Jamulus run by the Irish Association of Youth Orchestras (IAYO). The first was a presentation (on Zoom) of their experience, the technical requirements and how to set up the software; the second was an online experiment using Jamulus which was relayed to the Zoom attendees. I felt privileged to take part in the experimental ensemble which involved seven of us playing a five-part string orchestra piece. It worked incredibly well, and I felt a real sense of connectedness with the other players. We didn’t have a lot of time to set things up, but the balance worked well. Being rather further from the server than the Irish players, I suffered a bit more delay, but it was very manageable. There is no video attached to Jamulus, so we really had to listen to each other to synchronise our playing which, of course, is no bad thing.

The IAYO plan is to start with one player per part and expand to more players connected by Jamulus. I think much of the music in the CoMA library will work well over Jamulus. It probably needs to have a regular pulse or not require synchronisation as you can’t rely on a conductor for co-ordination. I also think that CoMA’s Open Score repertoire would be ideal for large orchestral ensemble so that they can build from a small group in the same manner as the IAYO plan.

I’d like to try this out with some CoMA players and CoMA music, though I don’t think it will work as part of an existing ensemble’s rehearsal programme because not all ensemble members will be able to take part because of technical and financial constraints so I think its best to convene a separate CoMA Jamulus ensemble along the lines of Marc Dooley’s CoMA Unlocked ensemble that tried out a range of technologies and music back in April.

The basic requirements are to

You can read more about the IAYO project, the technical requirements and see recordings of the workshop here.  Be aware that the feed of the experimental ensemble into Zoom seems to transform it into a scratchy 78rpm recording, but it sounded much better to the participants. I really enjoyed working with a lovely bunch of Irish musicians, with special thanks to Patrick (presenter), Allin (organiser) and Stephen (technologist).

Do get in touch if you’d like to take part in a CoMA Jamulus ensemble. 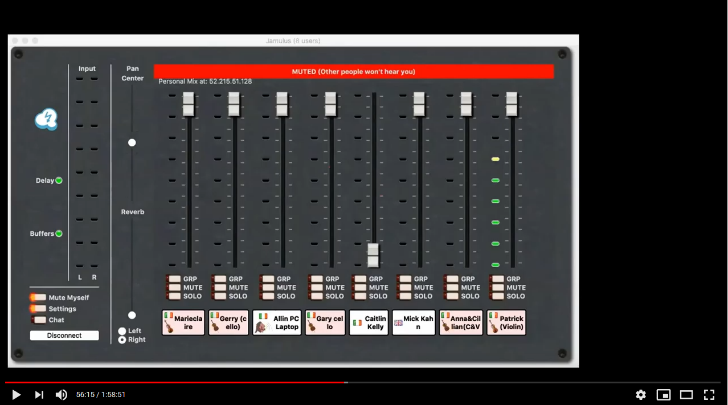