Interested in playing Contemporary Music? CoMA Leeds is a lively, friendly group who take playing new music seriously but still have fun. We have a mixture of instruments, musical ability and backgrounds and are always actively looking for new members – all instruments welcome. We don’t audition but are a performing group and some sight-reading ability is needed.

As part of CoMA national we have a wide repertoire of new music available to us, some of which has been specially commissioned by CoMA. There is also opportunity to take part in collaborative events with other CoMA groups and with other organisations locally. For example, in October 2014 we performed at St John’s Smith Square, London as part of a national CoMA event and in Manchester in February 2016 with Psappha and in March 2018 as part of the National Festival of Contemporary Music for All.

Our most recent project was to take part in the CoMA 2022 ‘Festival of Contemporary Music for all’, with a concert on 2 March 2022 at the HEART Centre in Headingley.

£8 a session.   Please note that Ensemble members are also required to be Members of CoMA nationally (a monthly standing order of £1 students, £2 concession, £3 standard or more if you can afford it).

Our Festival concert on 2nd March 2022

We gave a concert, on Wednesday 2nd March 2022 at HEART, a community centre in Leeds.  This was part of the Festival of Contemporary Music for All, with nine players under the direction of Elaine Levene.

We premiered Group Hug, written by Yshani Perinpanayagam. Yshani describes herself as “a multi-genre chamber musician, orchestral pianist and music director” and her piece illustrated the rather macabre process where a colony of bees deal with a hornet anxious to attack them.

Matthew Bellwood, a Leeds based writer and storyteller, joined us as the narrator for two items, both written by our own members: Plain Chanting was a setting of the poem Dover Beach by Matthew Arnold set to music by our conductor Elaine, and Curlew was a setting by Sue Watts of a poem by Gillian Clarke.  Matthew also narrated A Tale from the Frozen North, which led into A Chilly Reception, a theme by Henry Purcell arranged by Elaine.

A chorale by J S Bach, Ein feste Burg, led into a chorale-inspired piece When the Lord’s music met the Devil’s music by Phil Green, another one of our members.  Rondo for Africa by Andrew Melvin, and Blue Bottle (also by Yshani) completed the concert.

Our Festival concert on 4th March 2020

CoMA Leeds led a concert on 4th March 2020 at HEART, Headingley, Leeds, as part of the national festival.   The other participants were the Headingley Swing Choir (conducted by Jack Glover), who started their set with CoMA Blues by Kerry Andrew,  and Quiet Jazz Plus (led by our own Phil Green).

Our conductor was the ever-patient Elaine Levene. In our first set we played Jazz Suite by David Bevan, Studland Beach by Howard Cheesman, and Antique Orchestras by Peter McGarr.   In our second set we played Aqui by Bruno Gabirro, The Lake in the Ocean by Noah Gideon Meites, and Frenzy by Yfat Soul Zisso.

The audience enjoyed the evening and were full of compliments afterwards.

The ensemble in action

Some of our players 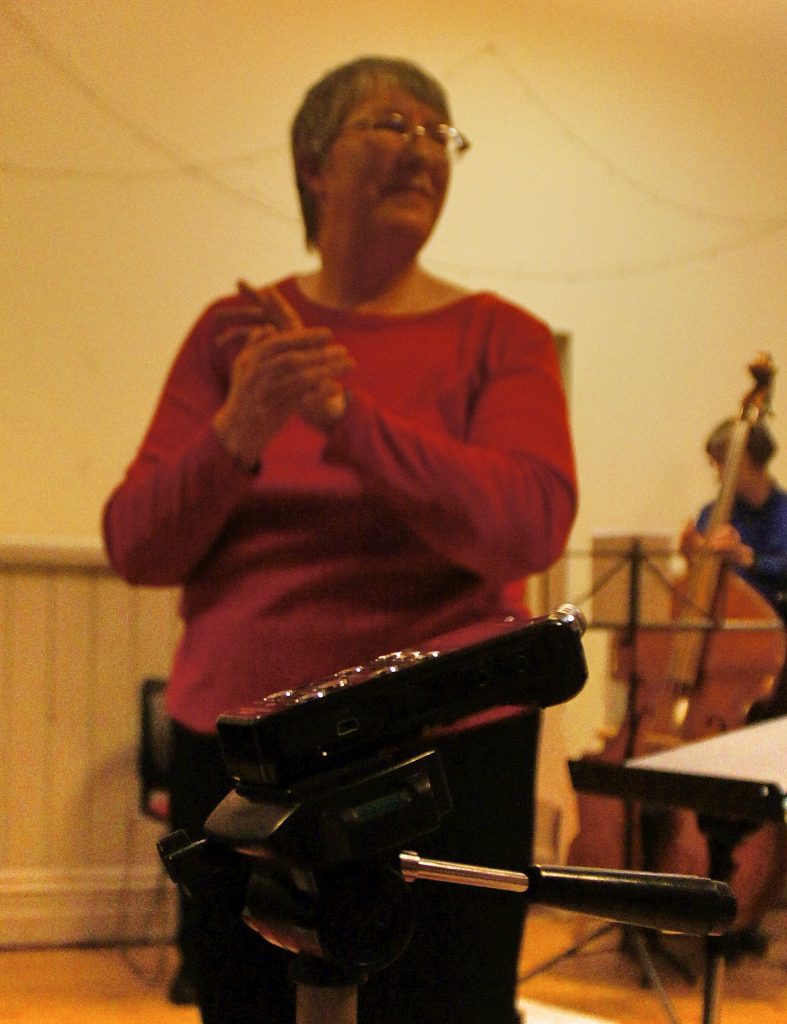