Creating an opera film in Greece with Lore Lixenberg

Lethe will create a filmed music theatre project using the backdrop provided by the beautiful unspoilt island of Kythira. What better location than the birthplace of Aphrodite for a modern interpretation of gods and heroes, a glittering cast of characters, from Orpheus the god of music to Charon the boatman, Hydra who guards the entrance to Hades, Persephone, queen of the underworld and Hermes, the guider of souls, as well as Nyx, Chronos and of course Apollo and Dionysus.

Each day structured musical and physical tasks will help you to explore different aspects of these characters and the stories generated around them. Using your voice or an instrument, your personal explorations in the context of music theatre will generate the material used for creating and filming the opera.

Each evening there will be a ritual drinking of the waters of the river Lethe. Blurring the border between art and life, with a chilled retsina, mojito or Mythos beer in hand, this ritual will symbolise your casting off of the character you explored that day and your reincarnation into a new character on the following day.

This project is open to absolutely anyone with a sense of adventure and an interest in performance and music. Whether as an experienced flautist or a late starter on the kazoo, a trained singer or someone who can hardly croak a note, there are characters and stories waiting for you to bring to life in the opera/film Lethe ! 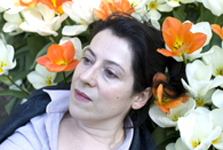 Born in the UK Lore Lixenberg has performed widely in opera, concert repertoire and music-theatre, and works with many leading composers and at many international festivals. Lixenberg worked on the development of and played the Roles of Peaches and Baby Jane in Jerry Springer the Opera and worked on the development of and appeared in Kombat Opera Presents  and Attention Scum. She commissioned two new song cycles with texts by Brecht in a new English translation by Tom Kuhns, composed by Richard Thomas and Niels Ronsholdt. She toured extensively with the Brodsky string quartet premiering the new song cycle Trees,Walls and Cities also performing Schubert and Purcell, making her Wigmore Hall debut with the Nash Ensemble. She has also recently been touring Kafka Fragments by Kurtag with violinist Aisha Orezbayeva.

She is a regular tutor at the CoMA Summer School.

The full fee covers seven nights accommodation in a self-catering apartment (£695 for sole occupancy or £570 in shared accommodation), transfers to and from Kythira’s airport or ferry port, mid-week and end of course group meals and all costs associated with the filmed production including local travel. There will also be the option to book accommodation before or after the course.

To Book we require a deposit of £120 together with a competed application form. Whilst we are optimistic all will go ahead, given current uncertainties, the deposit is returnable in full if indeed it proves impossible to run the project this year.

Browse all events in this series

Tutor
Booking
Browse all events in this series